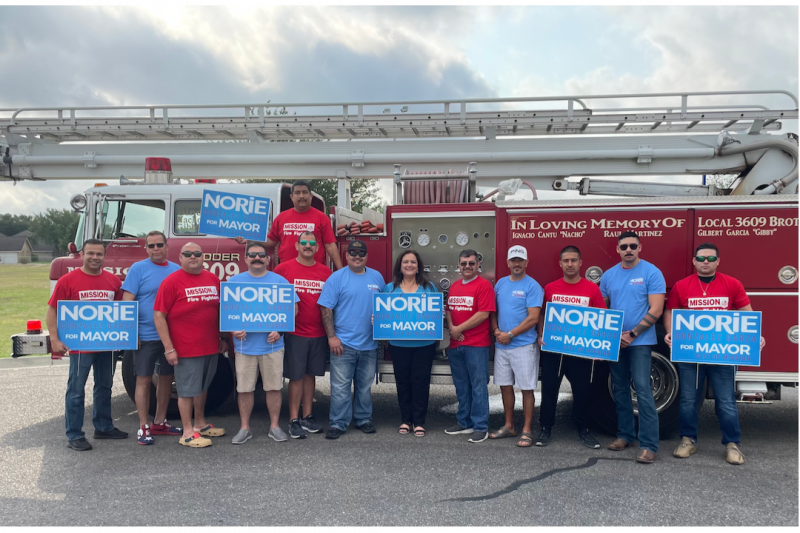 The fire fighters in Mission, Texas, don’t normally involve themselves in local elections, but that all changed this spring as the city’s mayoral race headed for a three-way runoff between the incumbent, a former mayor, and a 15-year councilwoman.

The fire fighters were at a crossroads, frustrated by the lack of cooperation with the incumbent mayor, and decided to jump in the mix and use their political clout to push a friendly face to public safety over the finish line.

“We do not usually get engaged in elections,” said Mike Silva, president of the Mission Fire Fighters Association. “The reason the fire fighters really got engaged is because we had a mayor who was always against us and always giving fire fighters a hard time. It was always a ‘no’ or an excuse from him. So we said, ‘You know what, we need to make a change.’”

The Mission fire fighters threw their support behind Norie Gonzalez Garza, a veteran member of city council who Silva said had been instrumental in pushing for equipment upgrades and more fire fighters on the street. Most notable was Garza’s support of the conversion to fire department-based emergency medical services – something other candidates were opposed to.

For Silva, the ramifications of a Gonzalez Garza loss in the election would have been a step back for the transition to a full fire department-based EMS system in Mission – something he said would have led to increased response time and a drastic drop in the level of care provided to the city’s residents.

After weeks of engagement from the Mission Fire Fighters Association, which included advertising and reviewing voter lists to boost turnout in the southern Texas town of about 75,000 people, Gonzalez Garza won the June 11 runoff by more than 800 votes and credited the fire fighters with buoying support for her leading up to the runoff.

“I am very grateful to the Mission fire fighters union,” Gonzalez Garza said. “I feel that they played a big role in my successful campaign, and I can’t thank them enough. I’m very proud of our fire fighters, and they do so much for our community. They deserve the very best that the city can offer them.”

As Silva looked back on their first foray into a full-throated endorsement of a political candidate, he said a success like this only comes after building a base of education for union members and a strong relationship with the community. That foundation, along with a PAC fund, is crucial to success in local elections, Silva said.

“Getting the training and building the relationships with people in your community is so important, so when it comes time that you need things from the community, you have people who support you,” Silva said. “Contact your state associations because they have a lot of vital information to provide you with training and tools to guide you to a successful election. And reach out to locals that have the experience and know what it takes to be successful. A lot of local leaders do hesitate to get engaged in something of this magnitude because of potential repercussions, but you have to take that step.”